This trip takes in all the prominent sights in and around the city of Lhasa, the historical home of the Dalai Lamas and home to most of the most important monasteries, Palaces and Temples in Tibetan Buddhism. Added to the 4 day itinerary are Samye, Yambulakhang and Mindrolling. This trip is perfect for those wishing to get an insight into Tibet without the overland travel. The journey by air from Kathmandu to Lhasa is a stunningly spectacular journey with Himalayan views all the way and a drive by past Everest, the highest Mountain on earth. Highlights of Lhasa city tour include visits to the Potala Palace, Jokhang Temple, Norbulingka Summer Palace, The Barkhor, and the great Monastic institutions of Sera, Drepung and Ganden. Like all our Sacred Himalaya Tours and Treks, they start and end in Kathmandu and include a comprehensive itinerary of sightseeing in the Kathmandu Valley. 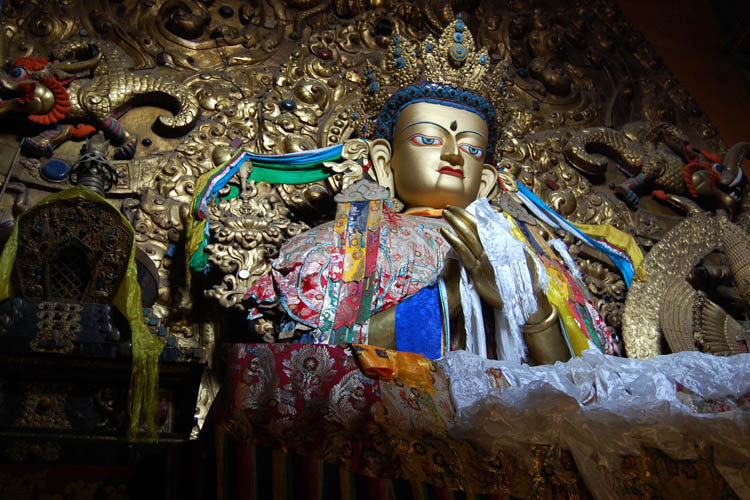 Day 4 – Kathmandu – Tsedang
You will be taken back to Tribhuvan airport where we will take the flight to Lhasa. This flight is one of the most spectacular flights you could undertake. The route takes you right by Mount Everest and over stunning mountain scenery all the way to Lhasa. On arrival at Lhasa Gongar airport you will be driven Tsedang where we will stay the night.

Day 5 – Tsedang – Samye – Yambulakhang
In the morning, after breakfast, drive to magnificent Samye Monastery which is the first monastery in Tibet. This was built by Great Tantrik Master Padma Sambhava in late 8th century. The grand building complex was structured in the model of the boundless universe regulated by the Buddhist scriptures. Its main building is a three story tower with an interior influenced by Tibetan, Han and Nepali style. After visiting Samye monastery back to Tsedang for lunch. After lunch visit the first Palace of Tibet Yambulakhang which was founded by Yarlung dynasty of Yarlung valley around in 1st century BC. And on the way back if time permit visit Tandruk temple. Overnight stay in Tsedang.

Day 6 – Tsedang – Mindrolling – Lhasa
We will take the journey from Tsedang to Lhasa. Along the way we will stop of at
Mindrolling Monastery. Mindrolling Monastery is one of the six major monasteries of the Nyingma school in Tibet. It was founded by Rigzin Terdak Lingpa in 1676. From there we will head for Lhasa. The rest of the day can be taken at leisure exploring the Barkhor and the Tibetan Quarter.

Day 7 – Potala Palace – Sera Monastery
Our first full day in Lhasa will start with a visit to Tibets most iconic building. The Potala Palace stands majestically overlooking the Tibetan part of the city. Standing 13 stories high this magnificent structure has over 1000 rooms and required the skills of 1,500 artists and skilled workers and 7,000 laborers. It has been the winter residence since the 17th Century from the 5th to the 14th Dalai Lama. After lunch, we take the short drive to Sera Monastery. Sera Monastery was built in 1419 and has always been an important Buddhist seminary. Sera means “The court of the wild Rose”, because of the many roses planted there. Today still 200 Lamas live there. The monastery is famous for the debating sessions of the monks.

Day 8 – Drepung – Norbulingka – Jokhang
Our second full day in Lhasa we visit Drepung monastery in the morning. Drepung means rice heap in Tibetan language, and lies 8 kilometers west of Mt. Gambo Utse, Drepung Monastery covers more than 200 thousand square meters. Once the largest monastery in the world, it was founded in 1416 by Jamyang Chojey, a leading disciple of Tsongkhapa. From Drepung we will head back into Lhasa via the Norbulingkha, summer residence of the Dalai Lamas. Norbulingka is a palace and surrounding park in Lhasa, Tibet, built in 1755. It served as the traditional summer residence of the successive Dalai Lamas from the 1780s up until the 14th Dalai Lama’s exile in 1959. In the afternoon we will visit the Jokhang Temple. For most Tibetans it is the most sacred and important temple in Tibet. It was founded during the reign of King Songsten Gampo around 642. According to tradition, the temple was built for the two brides of the king, Princess Wencheng of the Chinese Tang Dynasty and Princess Bhrikuti of Nepal.

Day 9 – Ganden Monastery & Drayerpa Cave
Today we will take the 60km drive up to Ganden Monastery. Ganden Monastery has extremely delicate and fine murals and sculptures. It also keeps an armor decorated with gems, which was worn by Emperor Qianlong and was bestowed to the monastery as an offering to Tsong Khapa. in the afternoon we will drive to Drayerpa Cave. Drayer Pa cave is 35 Kms away from Lhasa city. There are more than 30 caves for silence which take around one and a half hours to visit just some of them. We return in the evening back to Lhasa.

Day 10 – Lhasa – Kathmandu
We leave our accommodation early and take the hour long minibus journey back to Lhasa Gongar airport to get the China South West Airlines flight back to Kathmandu. As before this one and a half hour flight is one of the greatest flights you can take with spectacular views of mountain peaks from start to finish with the highlight being the view of Mount Everest from the right side of the plane as we approach Nepal and Kathmandu. The rest of your day can be spent at leisure. In the evening we will take you for a farewell Dinner, to an excellent traditional Nepalese restaurant where we will enjoy a Nepalese cultural program as well as a fine meal.

Day 11 – Depart Kathmandu
Depending on the time of your flight departure, you may have time for a little more sightseeing or shopping in Kathmandu. We will then take you to Tibhuvan airport 3 hours before the departure time of your flight home and see you to your departure terminal where we will say goodbye and hope very much, that you will have enjoyed your time with Temples of Nirvana