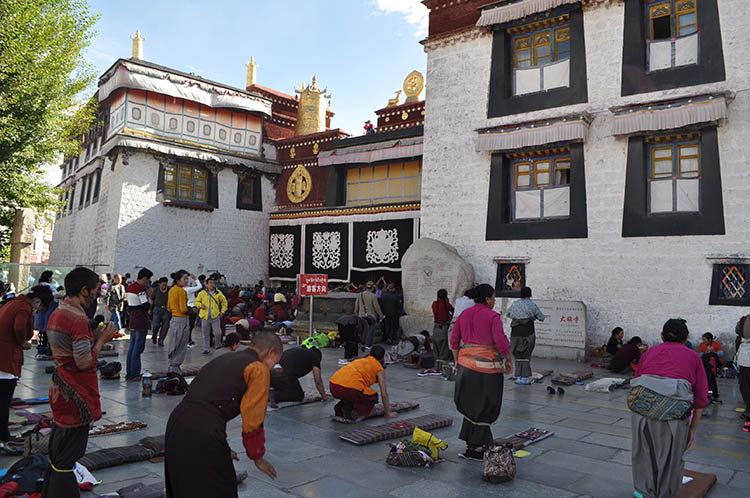 The Jokhang, also called the Qokang Monastery, Jokang, Jokhang Temple, Jokhang Monastery or Zuglagkang (Tsuklakang), is located on Barkhor Square in Lhasa. For most Tibetans it is the most sacred and important temple in Tibet. It is in some regards pan-sectarian, but is controlled by the Gelug school. The temple’s architectural style is a mixture of Indian vihara design, Chinese Tang Dynasty design, and Nepalese design.
It was founded during the reign of king Songsten Gampo. According to tradition, the temple was built for the two brides of the king, Princess Wencheng of the Chinese Tang Dynasty and Princess Bhrikuti of Nepal. Both wives are said to have brought important Buddhist statues and images from China and Nepal to Tibet as part of their dowries, and they were housed here. Many Nepalese artists worked to construct this temple.
During the Bon period of Tibet the temple was (and sometimes still is), called the Zuglagkang (House of Religious Science or House of Wisdom). The term zuglag refers to the ‘sciences’ such as geomancy, astrology, and divination which formed part of the pre-Buddhist shamanistic religion now referred to as Bon. It is more commonly known today as the Jokhang, which means the ‘House of the Buddha’.
Along with the Potala Palace, it is probably the most popular tourist attraction in Lhasa. It is part of the UNESCO World Heritage Site “Historic Ensemble of the Potala Palace,” and a spiritual centre of Lhasa.

History
The Jokhang temple was first constructed by King Songtsän Gampo (see also internet variant Songsten Gampo) probably in 642. It was originally called the Rasa Tulnang Tsuklakang or The House of Mysteries, The Magical Emanation at Rasa [the early name for Lhasa]. Both Bhrituti and Wencheng, the Nepalese and Chinese wives of Songsten Gampo are said to have brought important Buddhist statues and images to Tibet as part of their dowries, and they were housed here.
It was boarded up during the reign of the Bönpo king, Langdharma (reigned 838–841 CE). The famous Buddhist Master Atisha taught here in the 11th century and it has been considered the most important temple in Lhasa ever since.
This temple has remained a key center of Buddhist pilgrimage for centuries. It was sacked several times by the Mongols, but the building survived. In the past several centuries the temple complex was expanded and now covers an area of about 25,000 sq. meters .
In July 1966, the monastery was sacked and desecrated by Red Guards during the so-called Great Proletarian Cultural Revolution. Thousands of Buddhist scriptures were looted and burned.

Architecture
The Jokhang temple is a four-story construction, with roofs covered with gilded bronze tiles. The architectural style is based on the Indian vihara design, and was later extended resulting in a blend of Nepalese and Tang Dynasty styles. The rooftop statues of two golden deer flanking a Dharma wheel is iconic. Jokhang’s interior is a dark and atmospheric labyrinth of chapels dedicated to various gods and bodhisattvas, illuminated by votive candles and thick with the smoke of incense. Although some of the temple has been rebuilt, original elements remain: the wooden beams and rafters have been shown by carbon dating to be original; the Newari door frames, columns and finials date from the 7th and 8th centuries.
The Jokhang temple sits on Barkhor Square in the old section of Lhasa . The entire temple complex occupies approximately 25,000 sq.meters. Pilgrims circumambulate the temple as part a pilgrimage to the site. The circumabulation route is known as the “kora” in Tibetan and is marked by four large stone incense burners placed at the corners of the temple complex. After circumambulating the exterior, pilgrims make their way to the main hall of the temple which houses the Jowo Shakyamuni Buddha statue, perhaps the single most venerated object in Tibetan Buddhism. There are also famous statues of Chenresig, Padmasambhava and King Songtsan Gambo and his two foreign brides, Princess Wen Cheng, niece of Emperor Taizong of Tang China, and Princess Bhrikuti of Nepal. Many of the statues were destroyed during the Cultural Revolution, but have since been recreated – often including broken pieces of the original statues. A chapel to the south of the main hall houses many statues of various Bodhisattva many in yab-yum pose.
A walled enclosure in front of the Jokhang contains the stumps of willows known as the Jowo Utra (‘Hair of the Jowo’) which according to tradition were planted by Queen Wen Ching at the time the temple was consecrated. Two doring or inscribed pillars flank the north and south entrances to the temple. The pillar on the south side was erected by the Chinese in 1793 during a smallpox epidemic and records advice on hygiene measures to prevent smallpox. On the north side another far older pillar sits. It records the Sino-Tibetan treaty of 822 concluded by King Ralpacan and includes the following inscription: “Tibet and China shall abide by the frontiers of which they are now in occupation. All to the east is the country of Great China; and all to the west is, without question, the country of Great Tibet. Henceforth on neither side shall there be waging of war nor seizing of territory. If any person incurs suspicion he shall be arrested; his business shall be inquired into and he shall be escorted back,”
The third floor contains an image of Palden Lhamo, fierce protector of both Lhasa and the Dalai Lama.

Jokhang Collection of Buddhist Sculptures
The Jokhang owns a large and very important collection of about eight hundred metal sculptures, in addition to thousands of painted scrolls known as thangkas. The statues are hidden away in temples closed to the public and access is almost impossible. During numerous visits to the Jokhang between 1980 and 1996, Ulrich von Schroeder managed to take photographs of about five hundred metal statues of interest. Among them are some extremely rare and important brass and copper statues originating from Kashmir, Northern India, Nepal, Tibet, and China. However, the most important statues of the Jokhang collection are those that date back to the Yarlung dynasty (7th–9th century).