The Annapurna Circuit offers more variety than any other equivalent length trek, taking in virtually every type of scenery that Nepal has to offer. There are superb views of the Annapurnas and Dhaulagiri, and an amazing variety of landscapes ranging from sub-tropical through alpine to an arid semi-desert akin to Tibet. The climax of the trek is crossing the formidable Thorong La Pass (5416m). An 18 day trip which includes a full itinerary visiting the best sites of Kathmandu. 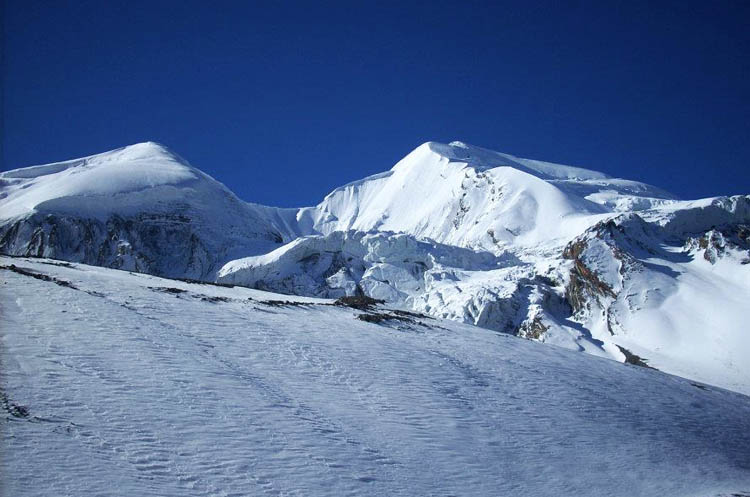 Day 3 – Kathmandhu – Bauhundanda
We leave Kathmandu early morning and drive towards Pokhara, Nepals second city, before leaving the road at Dumre and heading for Besisahar and then on to Ngadi. The drive is usually around 7 hours. We start our trek from Ngadi and make our way up to the village of Bauhundanda (1290m).

Day 4 – Bauhundanda – Jagat
From Bahandunda we once more cross the Marsyangdi Khola and head steeply up to Germu. From here we head up through Tallo Chiple.

Day 5 – Jagat – Dharapani
The trail then heads through the forest to Chamje. We emerge into a valley to Tal and into Manang before descending to and again crossing the river before arriving in Dharapani (1943m). The arrival to Dharapani is marked by a Chorten.

Day 6 – Dharapani – Chame
From Dharapani we ascend to Bagarchap and then on through forest to Dhanagyu before climbing to Temang. From here we have magnificent views of Manaslu. The trail then descends through more forest to Koto at the junction of the Nar_Phu Valley. We then make our way to the evenings accomodation at Chame (2713m) with stunning views of Annapurna ll.

Day 7 – Chame – Pisang
Chame – Pisang. From Chame we leave the forests and enter the upper district of Manang, known as Nyeshang. The trail follows the river for most of the day passing through a narrow and steep gorge to the Manang valley. Before Brathang we pass several waterfalls and then follow a steep narrow valley then head on up to Pisang (3185m).

Day 8 – Pisang – Manang
Pisang to Manang. We leave Pisang under the shadow of Pisang Peak and head up the valley to the picturesque village of Ghyaru dominated by Braga Monastery. From Ghyaru the trail traverses high above the valley floor. The views of Annapurna II, IV, III, the top of A1, Gangapurna, Black Rock, Tilicho Peak and Nilgiri are outstanding. We then arrive at Manang (3351m)

Day 9 – Manang – Acclimatisation Day
We spend the day at Manang acclimatising to the altitude. The day can be spent relaxing or you can climb the hill behind Manang to enjoy the magnificent views of the whole Annapurna range and the enormous icefall that crashes and rumbles down from Gangapurna. Here there are stunning views of Gangapurna and the Annapurnas.

Day 10 – Manang – Yak Kharka
Manang to Yak Kharka. Leaving Manang the trail ascends nearly 5000 metres to Yak Kharka. From the village we head to the base of the Thorong La. We climb out of the Marsyangdi valley and turn northwest up the valley of the Jarsang Khola. The landscape now becomes more baron and the vegetation more sparse. We stay the night in Yak Kharka (4210m)

Day 11 /12 – Yak Kharka – Muktinath
Thorung Phedi to Muktinath. The first part of the ascent is very steep, but it eases somewhat towards the top. Eventually, after numerous false summits, we reach the pass itself at 5416m. Ahead there is a magnificent panorama of snow-capped peaks extending northwards into Tibet, and looking back we can see several of the main peaks of Annapurna. Directly in front of us is the great chasm of the Kali Gandaki, 2,500m. From here we begin the descent to Muktinath (3802m).

Day 13 – Muktinath – Jomsom
After visiting the temples above Muktinath, we cross the Jhong Khola and head down the valley to the village of Kagbeni. The trail then follows the Kali Gandaki River down to Jomsom (2713m). Jomsom is sprawled along both banks of the Kali Gandaki and from here there are fine views of the Nilgiri peaks.

Day 14 – Jomsom to Pokhara
From Jomsom we take a flight to Pokhara where we stay for 2 nights and relax in the Lakeside area of Pokhara.

Day 15 – Day in Pokhara
We will spend the day at our leisure seeing the sights of Pokhara and around.

Day 17 – Kopan Monastery – Bouddhanath Stupa – Pashupatinath Temple
Our second sightseeing day in Kathmandu starts at Kopan Monastery perched majestically overlooking the Kathmandu Valley. Kopan is a little haven of serenity amongst the chaos of the Valley. We will then head for Boudhanath, the Tibetan area of Kathmandu where the mightily impressive Bouddhanath Stupa is situated. The Stupa is the second largest Stupa in the world. In the afternoon we will make our way to Pashupatinath Hindu Temple. In the evening we will take you for a farewell Dinner, to an excellent traditional Nepalese restaurant where we will enjoy a Nepalese cultural program as well as a fine meal.

Day 18 – Depart Kathmandu
Depending on the time of your flight departure, you may have time for a lttle more sightseeing or shopping in Kathmandu. We will then take you to Tibhuvan airport 3 hours before the departure time of your flight home and see you to your departure terminal where we will say goodbye and hope very much, that you will have enjoyed your time with Temples of Nirvana.

Cost of the Trip
The exact price of your trip depends on the date of travel and the number of travellers. We will quote you a price based on two people traveling together and sharing a twin/double room at a standard hotel in Kathmandu. If you require a single room or superior or deluxe accommodation please let us know. All prices quotes are starting from and ending in Kathmandu. The cost we quote you will include Jomsom-Pokhara-Kathmandu Flights. Please see our pages on Visas and Flights

**Please Note**
The cost of food whilst in the mountains is quite expensive and is excluded from many comparible Treks. Depending on the length of time you are in the mountains this can lead to a significant addition to your budget. A typical trek like the Everest Base Camp trek can easily add an extra £200 – £300. All Temples of Nirvana trek prices are inclusive of breakfast, Lunch and Dinner whilst on the trek. Our prices also include all internal flights.