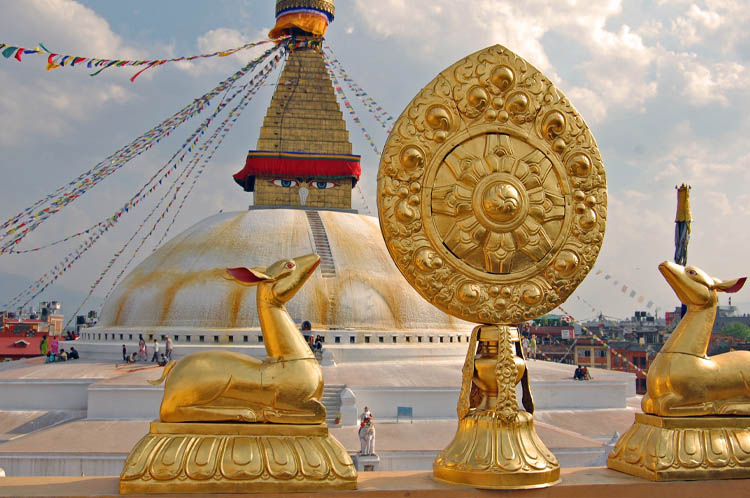 Boudhanath (also called Boudha, Bouddhanath or Baudhanath or the Khāsa Caitya) is one of the holiest Buddhist sites in Kathmandu, Nepal. It is known as Khāsti in Nepal Bhasa, Jyarung Khasyor in Tamang language or as Bauddha by speakers of Nepali.
The Buddhist stupa of Boudhanath dominates the skyline. The ancient Stupa is one of the largest in the world. The influx of large populations of refugees from Tibet has seen the construction of over 50 Tibetan Gompas (Monasteries) around Boudhanath. As of 1979, Boudhanath is a UNESCO World Heritage Site. Along with Swayambhunath, it is one of the most popular tourist sites in the Kathmandu area.
The Stupa is on the ancient trade route from Tibet which enters the Kathmandu Valley by the village of Sankhu in the northeast corner, passes by Boudnath Stupa to the ancient and smaller stupa of Cā-bahī (often called ‘Little Boudnath’). It then turns directly south, heading over the Bagmati river to Patan – thus bypassing the main city of Kathmandu (which was a later foundation). Tibetan merchants have rested and offered prayers here for many centuries. When refugees entered Nepal from Tibet in the 1950s, many decided to live around Boudhanath. The Stupa is said to entomb the remains of Kassapa Buddha

Mythology
This Boudha stupa was built just after the demise of Lord Buddha and is largest single Chhyorten in the world. Many Kilograms of gold were used in the decoration of the holy building. The legend of its building begins with one person:
An Apsara in a previous life, Jajima was born into a very ordinary family of the earth after the reduction of her religious merit from the heaven. She had four husbands, and gave birth to four sons from each of her husbands. Tajebu was born of a horse trader, Phajebu from a pig trader, khijebu from dog trader and Jyajebu from poultry business man. They had a most religious attitude, and decided to construct the largest chhorten (stupa). The land necessary for the stupa was made available by Majyamija, and construction was started soon after. The construction materials of soil, bricks and stones were carried on elephants, horses, donkeys etc. Majyamija died four years later, after completion of four stories of the structure, and after three more years of ceaseless efforts, the sons completed The Baudha stupa. It took almost seven years in total to complete the construction of the stupa.
It is believed that thousands of Buddhas and heavenly Deities incarnated as Lamas in the Baudha stupa It is said that because of Rabne, the rays of Bouddhisattwa entered in the song from heaven and the holy sound of was heard in the sky. Due to being empowered by the Bodhisatwa this stupa is viewed with a great reverence as are Sange, Thange Duibe, Chorten etc.
After the completion of the construction of Boudha stupa, Tajebu prayed very devoutly to become the king of the northern region to disseminate the religion, so he was the king Thichen Devajan of Tibet in his next life. Phajebu wished to be a scholar to disseminate the religion, and he became Bodhisattva, an enlightened teacher in Tibet in the next birth. Khijebu was incarnated as the enlightened Guru Rinpoche on Ashada Dashain (on the tenth day of lunar calendar of first half of Ashada) in Kashamir, at Orgen Yul, in the southwest area, at Dana Kukhya in the milk pond at the flower of lotus. He suppressed the Demons who were barriers to the religion and conserved and protected the religion from the Demonic attacks. Jajebu prayed to be a minister for the protection of religion in the north and as an answer to his prayer he was born at Tibet and became the minister Bhamitisi.
All of these people prayed for themselves but they did not pray for the animals, who transported bricks, soil, and stone. So these animals became angry and the elephant prayed to be the Demon in the next life to eliminate the religion. So he became the king of Tibet in the form of Langdharm in the next life, where Tajebu had disseminated the holiest religion. In the same way, the Donkey prayed to become a minister in the next life to destroy the religion and he too became a minister ‘Duilon Masyal Thoumbe” in Tibet.
A crow listened the prayers of these animals who prayed for the destruction of the holiest religion, and he (the crow) prayed to the Bauddha Stupa to be a minister to protect and preserve the holy religion by killing the demonic king Lang Dharma in the next life. He was born as Lha Lung Pay Kyi Dorje in the next life, and assassinated Lang Dharma with a bow and arrow.
The cowherds and shepherds, who prayed for the protection of religion and suppression of demons (who were attempting to eliminate the holy religion), were born as Choyolen Gohi Pema Chen in Tibet to conserve the religion. In the same way, Chodpurchan and Sarse, two Brahmins who prayed to the stupa to be born in the holy country and to write the holy literature were reborn in the next life as Kavapalcheka and Luigalchen; these two translated thousands of holy teachings of Lord Buddha and also wrote the holy Kangyur.
In addition to this, two crown princes of Nepal prayed to be helpers in dissesminating the religion, and they became Denama Chemang and Hegika Demoka in their next lives and wrote many holy books. Along with this, the religious king of Tibet, Dechen Devachan asked the greatest teacher Rinpoche: “what could be the factor and cultural background of our previous life that made us deeply devoted in religion and active in disseminating religious matters”? He was answered and was reverently referred by the Guru as ‘Jyarung Khasyor.

Legend of the Construction of the Stupa according to Tibetan Buddhist Mythology
“The village that surrounds the great Kāsyapa tower is generally known by the name of Bouddha. …which in Tibetan is called Yambu Chorten Chenpo. Yambu is the general name by which Kāthmāndu is known in Tibet; and Chorten Chenpo means great tower. The real name of the tower in full is, however, Ja Rung Kashol Chorten Chenpo, which may be translated into: “Have finished giving the order to proceed with.” The tower has an interesting history of its own which explains this strange name. It is said in this history that Kāsyapa was a Buddha that lived a long time before Shākyamuni Buddha. after Kāsyapa Buddha’s demise, a certain old woman, with her four sons, interred this great sage’s remains at the spot over which the great mound now stands, the latter having been built by the woman herself. Before starting on the work of construction, she petitioned the King of the time, and obtained permission to “proceed with” building a tower. By the time that, as a result of great sacrifices on the part of the woman and her four sons, the groundwork of the structure had been finished, those who saw it were astonished at the greatness of the scale on which it was undertaken. Especially was this the case with the high officials of the country, who all said that if such a poor old dame were allowed to complete building such a stupendous tower, they themselves would have to dedicated a temple as great as a mountain, and so they decided to ask the King to disallow the further progress of the work. When the King was approached on the matter his Majesty replied: “I have finished giving the order to the woman to proceed with the work. Kings must not eat their words, and I cannot undo my orders now.” So the tower was allowed to be finished, and hence its unique name, “Ja Rung Kashol Chorten Chenpo.” I rather think, however, that the tower must have been built after the days of Shākyamuni Buddha, for the above description from Tibetan books is different from the records in Sanskrit, which are more reliable than the Tibetan.” the biggest stupa in Nepal

History
The Gopālarājavaśāvalī says Boudhanath was founded by the Nepalese Licchavi king Śivadeva (c. 590-604 CE); though other Nepalese chronicles date it to the reign of King Mānadeva (464-505 CE).Tibetan sources claim a mound on the site was excavated in the late 15th or early 16th century and the bones of king Amshuvarmā 605-621 were discovered there. However, the Tibetan emperor, Trisong Detsän (r. 755 to 797) is also traditionally associated with the construction of the Boudhanath Stupa. Yolmo Ngagchang Sakya Zangpo from Helambu resurrected Boudhanath.