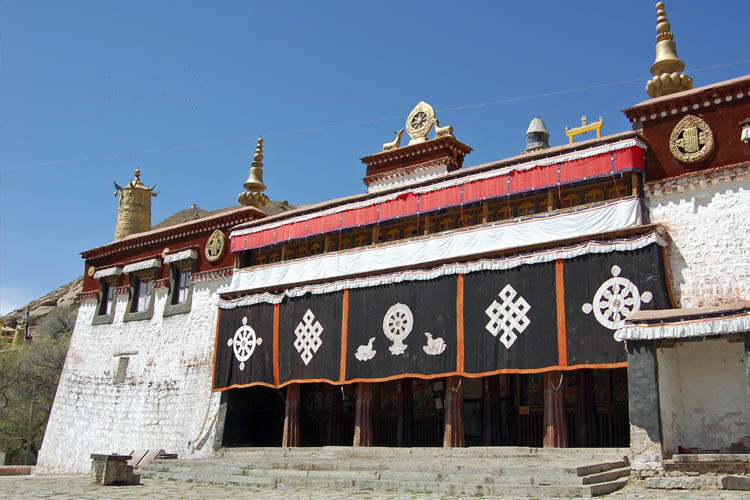 Sera Monastery is one of the ‘great three’ Gelukpa university monasteries of Tibet, located 1.25 miles (2.01 km) north of Lhasa. The other two are Ganden Monastery and Drepung Monastery. The origin of the name ‘Sera’ is attributed to a fact that the site where the monastery was built was surrounded by wild roses (se ra in Tibetan language) in bloom. The original Sera monastery is located in Lhasa, Tibet, about 5 kilometres (3.1 mi) north of the Jokang and is responsible for some 19 hermitages, including four nunneries, which are all located in the foot hills north of Lhasa. The Sera Monastery, as a complex of structures with the Great Assembly Hall and three colleges, was founded in 1419 by Jamchen Chojey of Sakya Yeshe of Zel Gungtang (1355–1435), a disciple of Tsongkhapa.
During the 1959 revolt in Lhasa, Sera monastery suffered severe damage, with its colleges destroyed and hundreds of monks killed. After the Dalai Lama took asylum in India, many of the monks of the Sera Monastery who survived the attack moved to Bylakuppe in Mysore, India. After initial tribulations, they established a parallel Sera Monastery with Sera Me and Sera Je colleges and a Great Assembly Hall on similar lines to the original monastery, with help from the Government of India. There are now 3,000 or more monks living in Sera, India and this community has also spread its missionary activities to several countries by establishing Dharma centres, propagating knowledge of Buddhism.
The Sera Monastery in Tibet and its counterpart in Mysore, India are noted for their “Monk Debates” on the teachings of Buddha and the philosophy of Buddhism. Sera Monastery developed over the centuries as a renowned place of scholarly learning, training hundreds of scholars, many of whom have attained fame in the Buddhist nations.

Background
The original Sera Monastery is a complex of structures founded in 1419 by Jamchen Chojey Sakya Yeshe of Zel Gungtang (1355–1435), a disciple of Tsongkhapa. Prior to establishing this monastery, Tsongkhapa, assisted by his disciples, had set up hermitages at higher elevations, above Sera Utse. The Sera complex is divided into two sectors by pathways; the eastern part contains the Tsokchen (Great Assembly Hall) and the Homdong Kangtsang (dwelling units) and the western part has the well known three colleges of the Sera Je Tratsang, the Sera Me Tratsang; and the Ngkapa Tratsang of Gelug (Lama Tsongkhapa) tradition, instituted by Tsongkhapa as monastic universities that catered to monks in the age range 8 to 70. All the structures within this complex formed a clockwise pilgrimage circuit, starting with the colleges (in the order stated), followed by the hall, the dwelling units and finally ending at the hermitage of Tsongkhapa above the Great Assembly Hall.
The Jé and Mé colleges were established to train monks, over a 20 year programme of tsennyi mtshan nyid grwa tshang (philosophical knowledge), which concludes with a geshédge degree. The Ngakpa college, which predated the other two colleges, was exclusively devoted to the practice of tantric ritual (kurim dratsangsku rim grwa tshang). Before 1959, the administration of each college comprised an abbot with council of ten Lamas (LakhachuBla kha bcu) for each college.
Over the years, the monastery developed into a hermitage where about 6000 monks resided (but in 2008 it had only 550 monks in residence). The monastery was one of the finest locations in Tibet to witness the “Monk Debates” on teachings of Buddha and the philosophy of Buddhism, which were held according to a fixed schedule). The monastery belonged to the Gelukpa Order and was one of the largest in Lhasa.

History
The history of the monastery is strongly connected to Master Lama Tsongkhapa (1357–1419), the founder of the Gelukpa Order, the much venerated and highly learned guru in Buddhist scriptures. It was under his divine tutelage that his disciple Jetsun Kunkhen Lodroe Rinchen Senge established the Sera Jey Monastery complex in early 15th Century AD. Kunkhyen Lodroe Rinchen Senge initially served as a teacher in the Drepung Monastery before he formed the Sera Jey. The religious legend narrated for how the site was chosen was a clairvoyant vision that Tsongkhapa had in which he saw the full text of Prajnaparamita’s 20 slokas on Shunyata captioned in the sky. This psychic spell gave him a full insight into the Tsawasehrab (Fundamentals of Madhyamika or Shunyata) text. Further, he also perceived the “vision of a rain like “AA” characters descending from the sky”. It was only 12 years later that one of his pupils, Jamchen Choje, fulfilled the prophesy of his guru by establishing the Sera Je as a seat of learning knowledge of the complete teachings and practices of the Mahayana tradition.
Providentially, the then King Nedong Dagpa Gyaltsen supported the noble venture with required finances and also, in 1419, performed the foundation laying ceremony for construction of the monastery. Further detailing with regard to the building development including installing sacred images/idols and other objects of worship were completed according to the supreme wishes of great Lama Tsongkhapa. The monastery soon came to be known as “the Seat of Theckchen ling (Mahayana Tradition)”. Another version for the name ‘Sera’ that came to be prefixed with ‘Monastery’ was its location that was surrounded by raspberry shrubs called ‘Sewa’ in Tibetan, that formed like a ‘Rawa’ in Tibetan, meaning “Fence”.

Post-1959 events
The 14th Dalai Lama fled to India in 1959 and sought asylum there. During the month of March of the same year the Sera Jey Monastery had been destroyed by bombardment, which resulted in death of hundreds of monks (in 1959, the count of monks living in Sera Jey was 5629), apart from destruction of ancient texts and loss of innumerable, invaluable, ancient and antique works of art. Many of those who survived (monks and common people) this onslaught by the Chinese fled to India, under severe winter weather conditions, across the Himalayas. Following this mass exodus of people from Tibet (including, a few hundred Sera Jey lamas, geshes and monks), when they arrived in India, they were resettled at Bylakuppe near Mysore, Karanataka state among many other locations spread across the country, as one of the exclusive Tibetan establishments with ready assistance forthcoming from the Government of India. It was in 1970 that the group of 197 Sera Jey monks with 103 of Sera Mey monks established a special monastery within the resettlement of Bylakuppe as a counterpart of the Tibetan Sera Jey Monastery. As none of the monks of the Ngagpa Dratsang (Tantric College) had survived the invasion, only the Sera Mey College and Sera Jey College were re-formed in India. The Bylakuppe Monastery now houses 5,000 Buddhist monks comprising some migrants and many other Tibetans who were not born in their ancestral homeland.
With forest land allotted by the Government of India, two arms of the Sera Monastery, representing the migrant monks of the Tibetan Sera Je and Sera Me colleges were established; 193 Sera je monks got 147.75 acres (59.79 ha) and 107 monks of Sera Me got an allotment of the balance area. Further, 38 tenements were built with grants by the Government of India for the Monks to reside and pursue their vocation of monkshood coupled with tilling the surrounding allotted land for raising food crops for survival. Well established as an organised Monastery with dedicated efforts of the monks, an Assembly Prayer Hall that could accommodate 1500 monks was also completed in 1978. This Monastery is now the nodal monastery, with its affiliation to several smaller monasteries spread across various regions in Tibet; its popularity could be gauged by the 3000 or more monks living here now. Encouraged by this success and noting the pressure on existing infrastructure, an additional, much larger and an impressive Assembly hall (measuring 23,275 square feet (2,162.3 m2), 31 feet (9.4 m) high with 110 pillars) has been built that can accommodate 3500 monks to assemble for prayers. With this development, Sera has now two facets, the original “Tibetan Sera” and the Bylakuppe “New Sera” of the “Tibetan Diaspora” with the counterpart Jé, Mé monasteries, with the Ngakpa college counterpart also added recently. The Sera-India monk community of the Bylakuppe Monastery, has gone global with their missionary activity by establishing “dharma centers” in many parts the world, thus removing the cultural isolation of pre-1959 years in Tibet
Sera, Tibet that housed more than 5,000 monks in 1959, though badly damaged following the invasion of Tibet and the 1959 Revolution, is still functional after restoration. In 2011, according to local sources, there are about 300 monks. The reason for this decline is attributed to the 2008 Tibetan unrest.