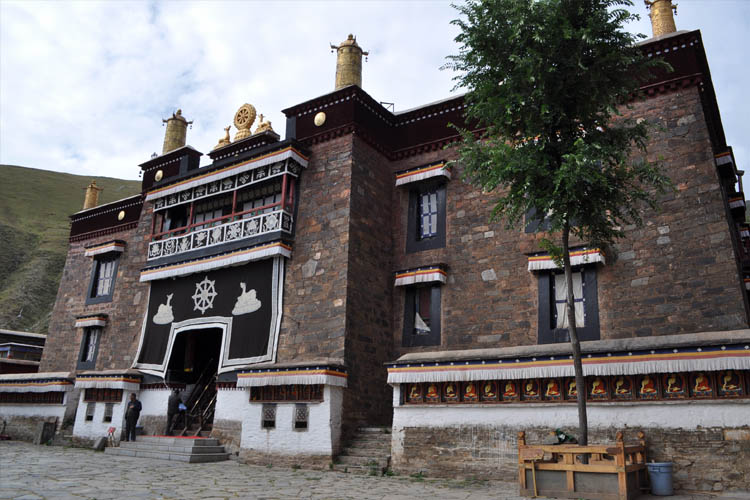 Mindrolling Monastery is one of the six major monasteries of the Nyingma school in Tibet. It was founded by Rigzin Terdak Lingpa in 1676. Tendrak Lingpa’s lineage is known as the Nyo lineage. Mindrolling, in Tibetan means “Place of Perfect Emancipation”. It is located in Zhanang County, Shannan Prefecture, Tibet Autonomous Region, China, approximately 43 kilometers east of the Lhasa airport, on the south side of the Tsangpo river.

History
Mindrolling was heavily damaged in 1718 by the Dzungar Mongols from East Turkistan. It was rebuilt during the reign of the Seventh Dalai Lama (1708-1757). Dungsay Rinchen-namgyel and Jetsunma Mingyur Paldron, the son and daughter of Terdak Lingpa, supervised its reconstruction.
For nearly 300 years its monastic university trained Nyingma scholars and yogis from all over Tibet.
At Mindrolling, special emphasis was placed on the learning of Buddhist scriptures, astronomy, Tibetan lunar calendar, calligraphy, rhetoric, and Traditional Tibetan medicine. Monks traditionally studied thirteen major sutra and tantra texts of the Nyingma, and learned the practices stemming from various terma, especially from the lineage of Terdak Lingpa. The monastery had at one time, over one hundred satellites and its throne holder was one of the most revered in Tibet.
At the time of the 1959 revolt against Chinese Communist rule in Central Tibet, there were approximately 300 monks at Mindrolling. In the years after 1959, the monastery again suffered damage to its buildings, but it was not as severe as at other monasteries such as Ganden. At present, the monastery is still being reconstructed in Tibet.

Mindrolling in India
The stupa of the re-established Mindrolling Monastery, in Clement Town, Dehradun.
In 1965, Khochhen Rinpoche and small group of monks began the process of re-establishing Mindrolling monastery located near Clement Town, in Dehra Dun, Uttarakhand state, India. It now contains Ngagyur Nyingma College, one of the largest Buddhist institutes in India.
Khotrul Jurme Dogyud Gyatso Rinpoche, known also as Khochhen Rinpoche, was born in 1937 in Gonjo in Eastern Tibet. He was considered at an early age to be the reincarnation of Namdrol Sangpo Rinpoche of Khochhen Monastery by the 8th Mindrolling Khenchen. At Mindrolling in Tibet, Rinpoche studied and mastered Buddhist philosophy, Sutra and Tantra, calligraphy, rituals and so on. He received profound teachings and instructions from masters including Dzongsar Khyentse Chokyi Lodroe, Minling Chung Rinpoche and the 8th Minling Khenchen Rinpoche. Rinpoche was at Mindrolling for well over ten years until the Communist invasion in 1959.
Following the invasion, Rinpoche, at the age of 22, escaped into exile in India as one of the seven-member entourage of His Holiness Mindrolling Trichen Rinpoche. In 1965, he selected land near Dehra Dun and built Mindrolling Monastery. In 1976, His Holiness was invited to assume leadership.
Since the establishment of Mindrolling in India, Rinpoche has worked tirelessly on the expansion and maintenance of the monastery and today it houses five hundred monks.
Rinpoche established the Ngagyur Nyingma College or Institute of Advanced Buddhist Studies in 1991, which teaches a nine-year course including Sutra and Tantra to approximately one hundred monks. With the intention of spreading the Buddhadharma and for the benefit of all sentient beings, many tulkus and monks have graduated and received the title of khenpo from this college over the years.
Near Mindrolling Monastery, Rinpoche erected a 190 feet high Stupa of the Buddha’s Descent from the God Realms, inaugurated in 2002, and dedicated to world peace. It is excellent on the inside, outside and all around.
In East India in Kalimpong, Rinpoche constructed a new monastery in the Mindrolling lineage, and to benefit the poor people of the region, a school for more than one hundred children, inaugurated on 1 March 2007, as well as a clinic and much more.
Rinpoche is continually engaged in similar activities for the benefit of others and especially for poor and protectorless people. Rinpoche also assists with money donations for fees so that parents with little means are able to send their children to school. In the same way that a mother cares for her only child, Rinpoche cares for all sentient beings.
In India’s capital, Delhi, Rinpoche has built a new Mindrolling branch monastery, inaugurated in 2005, in which twenty monks perform pujas for the benefit of all sentient beings every morning and evening.
Also in Taiwan, Rinpoche has founded several Mindrolling Dharma centres in Taipei, Chang Hua, Taichung City and Kaohsing City.
Besides being the director of Mindrolling Monastery, Rinpoche has served as President of the Tibetan Community of Clement Town since 1987.
With a heartfelt wish that Rinpoche’s life may last long and that all his enlightened activities may be spontaneously accomplished.