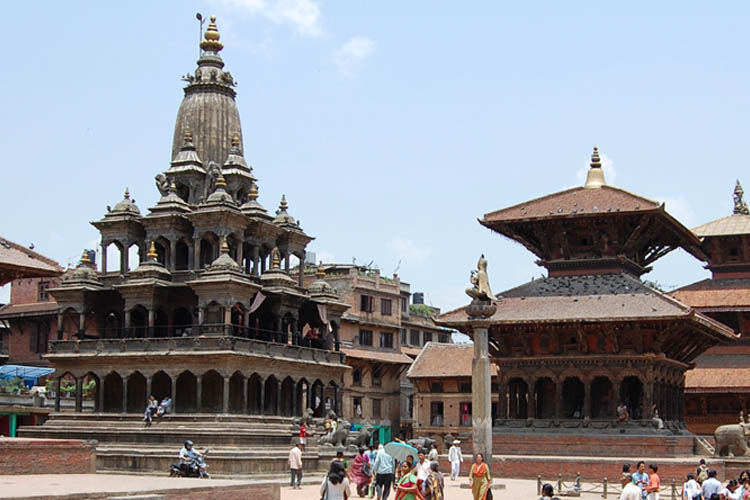 Kathmandu Durbar Square or Hanumandhoka Durbar Square is the plaza in front of the old royal palace of the Kathmandu Kingdom. It is one of three Durbar (royal palace) Squares in the Kathmandu Valley in Nepal, all of which are UNESCO World Heritage Sites.
The Durbar Square is surrounded with spectacular architecture and vividly showcases the skills of the Newar artists and craftsmen over several centuries. The royal palace was originally at Dattaraya square and was later moved to the Durbar square location.
The Kathmandu Durbar Square holds the palaces of the Malla and Shah kings who ruled over the city. Along with these palaces, the square surrounds quadrangles revealing courtyards and temples. It is known as Hanuman Dhoka Durbar Square, a name derived from a statue of Hanuman, the monkey devotee of Lord Ram, at the entrance of the palaceHistory and construction
The preference for the construction of royal palaces at this site dates back to as early as the Licchavi period in the third century. Even though the present palaces and temples have undergone repeated and extensive renovations and nothing physical remains from that period, names like Gunapo and Gupo, which are the names referred to the palaces in the square in early scriptures, imply that the palaces were built by Gunakamadev, a king ruling late in the tenth century. When Kathmandu City became independent under the rule of King Ratna Malla (1484–1520) the palaces in the square became the royal palaces for its Malla kings. When Prithvi Narayan Shah invaded the Kathmandu Valley in 1769, he favored the Kathmandu Durbar Square for his palace. Other subsequent Shah kings continued to rule from the square until 1896 when they moved to the Narayan Hiti Palace.
The square is still the center of important royal events like the coronation of King Birendra Bir Bikram Shah in 1975 and King Gyanendra Bir Bikram Shah in 2001.
Though there are not any written archives stating the history of the Kathmandu Durbar Square, the construction of the palace in the square is credited to Sankharadev (1069–1083). As the first king of the independent Kathmandu City, Ratna Malla is said to have built a Taleju temple at the Northern side of the palace in 1501. For this to be true then the temple would have had to have been built in the vihara style as part of the palace premise surrounding the Mul Chok courtyard for no evidence of a separate structure that would match this temple can be found within the square.
The construction of the Karnel Chok is not clearly stated in any historical inscriptions although it is probably the oldest among all the courtyards in the square. A Bhagavati Temple, originally known as a Narayan Temple, rises above the mansions surrounding it and was added during the time of Jagajaya Malla in the early eighteenth century. The Narayan idol within the temple was stolen so Prithvi Narayan Shah replaced it with an image of Bhagavati, completely transforming the name of the temple.
The oldest temples in the square are those built by Mahendra Malla (1560–1574). They are the temples of Jagannath, Kotilingeswara Mahadev, Mahendreswara, and the Taleju Temple. This three-roofed Taleju Temple was established in 1564, in a typical Newari architectural style and is elevated on platforms that form a pyramid-like structure. It is said that Mahendra Malla, when he was residing in Bhaktapur, was highly devoted to the Taleju Temple there; the Goddess being pleased with his devotion gave him a vision asking him to build a temple for her in the Kathmandu Durbar Square. With a help of a hermit, he designed the temple to give it its present form and the Goddess entered the temple in the form of a bee.
His successors Sadasiva (1575–1581), his son, Shiva Simha (1578–1619), and his grandson, Laxmi Narsingha (1619–1641), do not seem to have made any major additions to the square. During this period of three generations the only constructions to have occurred were the establishment of Degutale Temple dedicated to Goddess Mother Taleju by Shiva Simha and some enhancement in the royal palace by Laksminar Simha.

Under the Shah dynasty
During the Shah dynasty that followed, the Kathmandu Durbar Square saw a number of changes. Two of the most unique temples in the square were built during this time. One is the Nautale, a nine-storied building known as Vasantapur Durbar. It has four roofs and stands at the end of Nasal Chok at the East side of the palace. It is said that this building was set as a pleasure house. The lower three stories were made in the Newari farmhouse style. The upper floors have Newari style windows, sanjhya and tikijhya, and some of them are slightly projected from the wall. The other temple is annexed to the Vasantapur Durbar and has four-stories. This building was initially known as Vilasamandira, or Lohom Chok, but is now commonly known as Basantapur or Tejarat Chok. The lower floors of the Basantapur Chok display extensive woodcarvings and the roofs are made in popular the Mughal style. Archives state that Prthivi Narayan Shah built these two buildings in 1770.
Rana Bahadur Shah was enthroned at the age of two. Bahadur Shah, the second son of Prithvi Narayan Shah, ruled as a regent for his young nephew Rana Bahadur Shah for a close to a decade from 1785 to 1794 and built a temple of Shiva Parvati in the square. This one roofed temple is designed in the Newari style and is remarkably similar to previous temples built by the Mallas. It is rectangular in shape, and enshrines the Navadurga, a group of goddesses, on the ground floor. It has a wooden image of Shiva and Parvati at the window of the upper floor, looking out at the passersby in the square. Another significant donation made during the time of Rana Bahadur Shah is the metal-plated head of Swet Bhairav near the Degutale Temple. It was donated during the festival of Indra Jatra in 1795, and continues to play a major role during the festival every year. This approximately twelve feet high face of Bhairav is concealed behind a latticed wooden screen for the rest of the year. The following this donation Rana Bahadur donated a huge bronze bell as an offering to the Goddess Taleju. Together with the beating of the huge drums donated by his son Girvan Yudha, the bell was rung every day during the daily ritual worship to the goddess. Later these instruments were also used as an alarm system. However, after the death of his beloved third wife Kanimati Devi due to smallpox, Rana Bahadur Shah turned mad with grief and had many images of gods and goddesses smashed including the Taleju statue and bell, and Sitala, the goddess of smallpox.
In 1908, a palace, Gaddi Durbar, was built using European architectural designs. The Rana Prime Ministers who had taken over the power but not the throne of the country from the Shahs Kings from 1846 to 1951 were highly influenced by European styles. The Gaddi Durbar is covered in white plaster, has Greek columns and adjoins a large audience hall, all foreign features to Nepali architecture. The balconies of this durbar were reserved for the royal family during festivals to view the square below.
Some of the parts of the square like the Hatti Chok near the Kumari Bahal in the southern section of the square were removed during restoration after the devastating earthquake in 1934. While building the New Road, the southeastern part of the palace was cleared away, leaving only fragments in places as reminders of their past. Though decreased from its original size and attractiveness from its earlier seventeenth-century architecture, the Kathmandu Durbar Square still displays an ancient surrounding that spans abound five acres of land. It has palaces, temples, quadrangles, courtyards, ponds, and images that were brought together over three centuries of the Malla, the Shah, and the Rana dynasties.