Menu
Lumbini
Birthplace of the Buddha 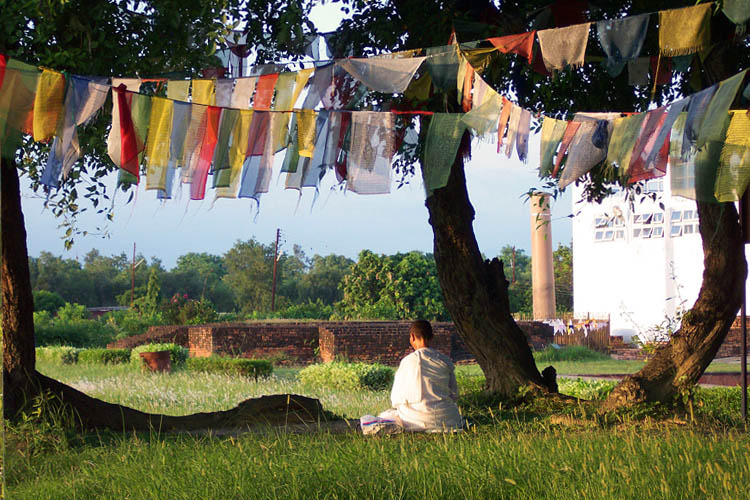 Lumbini is the place where the Buddha, known as the Tathagata* was born. It is the place which should be visited and seen by a person of devotion and which should cause awareness and apprehension of the nature of impermanence.’ * Tathagata – One who has found the Truth.

The birthplace of the Gautama Buddha, Lumbini, is the Mecca of every Buddhist, being one of the four holy places of Buddhism. It is said in the Parinibbana Sutta that Buddha himself identified four places of future pilgrimage: the sites of his birth, enlightenment, first discourse, and death. All of these events happened outside in nature under trees. While there is not any particular significance in this, other than it perhaps explains why Buddhists have always respected the environment and natural law.

The Location of Lumbini
Lumbini is situated at the foothills of the Himalayas in modern Nepal. In the Buddha’s time, Lumbini was a beautiful garden full of green and shady Sal trees (Shorea). The garden and its tranquil environs were owned by both the ShaAsoka pillarkyas and Kolias clans. King Suddhodana, father of Gautama Buddha was of the Shakya dynasty belonging to the Kshatriya or the warrior caste. Maya Devi, his mother, gave birth to the child on her way to her parent’s home in Devadaha while taking rest in Lumbini under a sal tree in the month of May in the year 642 B.C. The beauty of Lumbini is described in Pali and Sanskrit literature. Maya Devi it is said was spellbound to see the natural grandeur of Lumbini. While she was standing, she felt labor pains and catching hold of a drooping branch of a Sal tree, the baby, the future Buddha, was born.

The bas relief above [ click to view ] depicts Maya Devi with her right hand holding on to a branch of a sal tree with a newborn child standing upright on a lotus petal, shedding an oval halo, around his head, while two celestial figures pour water and lotuses from vessels of heaven as indicated by the delineation of clouds. This nativity scene was installed by Malla Kings of the Naga dynasty from about the 11th to 15th Century in the Karnali zone of Nepal.

In 249 BC, when the Emperor Ashoka visited Lumbini it was a flourishing village. Ashoka constructed four stupas and a stone pillar with a figure of a horse on top. The stone pillar bears an inscription which, in English translation, runs as follows: “King Piyadasi (Ashoka), beloved of devas, in the 20 year of the coronation, himself made a royal visit, Buddha Sakyamuni having been born here, a stone railing was built and a stone pillar erected to the Bhagavan having been born here, Lumbini village was taxed reduced and entitled to the eight part (only)”.

Maya Devi TempleLumbini remained neglected for centuries. In 1895, Feuhrer, a famous German archaeologist, discovered the great pillar while wandering about the foothills of the Churia range. Further exploration and excavation of the surrounding area revealed the existence of a brick temple and a sandstone sculpture within the temple itself which depicts the scenes of the Buddha’s birth.

It is pointed out by scholars that the temple of Maya Devi was constructed over the foundations of more than one earlier temple or stupa, and that this temple was probably built on an Ashokan stupa itself. On the south of the Maya Devi temple there is the famous sacred bathing pool known as Puskarni. It is believed that Maha Devi took a bath in this pool before the delivery. By the side of the Ashoka pillar there is a river which flows southeast and is locally called the ‘Ol’ river. In 1996, an archaeological dig unearthed a “flawless stone” placed there by the Indian Emperor Ashoka in 249 BC to mark the precise location of the Buddha’s birth more than 2,600 years ago, if authenticated, the find will put Lumbini even more prominently on the map for millions of religious pilgrims.

Recently, several beautiful shrines have been built by devotees from Buddhist countries. A visit to Lumbini, the birthplace of Buddha, is not only for spiritual enlightenment but also for solace and satisfaction that one gets in such a calm and peaceful place.