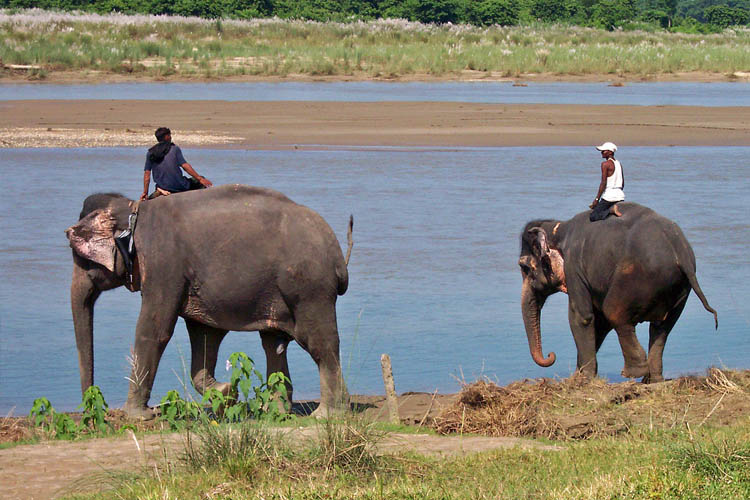 Chitwan National Park is the first national park in Nepal. Formerly called Royal Chitwan National Park it was established in 1973 and granted the status of a World Heritage Site in 1984. It covers an area of 932 km2 (360 sq mi) and is located in the subtropical Inner Terai lowlands of south-central Nepal in the Chitwan District. In altitude it ranges from about 100 m (330 ft) in the river valleys to 815 m (2,674 ft) in the Churia Hills.
In the north and west of the protected area the Narayani-Rapti river system forms a natural boundary to human settlements. Adjacent to the east of Chitwan National Park is Parsa Wildlife Reserve, contiguous in the south is the Indian Tiger Reserve Valmiki National Park. The coherent protected area of 2,075 km2 (801 sq mi) represents the Tiger Conservation Unit (TCU) Chitwan-Parsa-Valmiki, which covers a 3,549 km2 (1,370 sq mi) huge block of alluvial grasslands and subtropical moist deciduous forests

History
Since the end of the 19th century Chitwan – Heart of the Jungle – used to be a favorite hunting ground for Nepal’s ruling class during the cool winter seasons. Until the 1950s, the journey from Kathmandu to Nepal’s south was arduous as the area could only be reached by foot and took several weeks. Comfortable camps were set up for the feudal big game hunters and their entourage, where they stayed for a couple of months shooting hundreds of tigers, rhinocerosses, leopards and sloth bears.
In 1950, Chitwan’s forest and grasslands extended over more than 2,600 km2 (1,000 sq mi) and was home to about 800 rhinos. When poor farmers from the mid-hills moved to the Chitwan Valley in search of arable land, the area was subsequently opened for settlement, and poaching of wildlife became rampant. In 1957, the country’s first conservation law inured to the protection of rhinos and their habitat. In 1959, Edward Pritchard Gee undertook a survey of the area, recommended creation of a protected area north of the Rapti River and of a wildlife sanctuary south of the river for a trial period of ten years. After his subsequent survey of Chitwan in 1963, this time for both the Fauna Preservation Society and the International Union for Conservation of Nature, he recommended extension of the sanctuary to the south.
By the end of the 1960s, 70% of Chitwan’s jungles were cleared using DDT, thousands of people had settled there, and only 95 rhinos remained. The dramatic decline of the rhino population and the extent of poaching prompted the government to institute the Gaida Gasti – a rhino reconnaissance patrol of 130 armed men and a network of guard posts all over Chitwan. To prevent the extinction of rhinos the Chitwan National Park was gazetted in December 1970, with borders delineated the following year and established in 1973, initially encompassing an area of 544 km2 (210 sq mi).
In 1977, the park was enlarged to its present area of 932 km2 (360 sq mi). In 1997, a bufferzone of 766.1 km2 (295.8 sq mi) was added to the north and west of the Narayani-Rapti river system, and between the south-eastern boundary of the park and the international border to India.
The park’s headquarters is in Kasara. Close-by the Gharial and Turtle Conservation Breeding Centres have been established. In 2008, a Vulture breeding centre was inaugurated aiming at holding up to 25 pairs of each of the two Gyps vultures species now critically endangered in Nepal – the Oriental white-backed vulture and the slender-billed vulture.

Mammals
The Chitwan National Park is home to at least 43 species of mammals. The “King of the Jungle” is the Bengal tiger. The alluvial floodplain habitat of the Terai is one of the best tiger habitats anywhere in the world. Since the establishment of Chitwan National Park the initially small population of about 25 individuals has increased to 70–110 in 1980. In some years this population has declined due to poaching and floods. In a long-term study carried out from 1995–2002 tiger researchers identified a relative abundance of 82 breeding tigers and a density of 6 females per 100 km2.[10] Information obtained from camera traps in 2010 and 2011 indicated that tiger density ranged between 4.44 and 6.35 individuals per 100 km2. They offset their temporal activity patterns to be much less active during the day when human activity peaked.
Leopards are most prevalent on the peripheries of the park. They co-exist with tigers, but being socially subordinate are not common in prime tiger habitat. In 1988, a clouded leopard was captured and radio-collared outside the protected area, and released into the park but did not stay.
Chitwan is considered to have the highest population density of sloth bears with an estimated 200 to 250 individuals. Smooth-coated otters inhabit the numerous creeks and rivulets. Bengal foxes, spotted linsangs and honey badgers roam the jungle for prey. Striped hyenas prevail on the southern slopes of the Churia Hills. During a camera trapping survey in 2011, wild dogs were recorded in the southern and western parts of the park, as well as golden jackals, fishing cats, jungle cats, leopard cats, large and small Indian civets, Asian palm civets, crab-eating mongooses and yellow-throated martens.
Rhinoceros: since 1973 the population has recovered well and increased to 544 animals around the turn of the century. To ensure the survival of the endangered species in case of epidemics animals are translocated annually from Chitwan to the Bardia National Park and the Sukla Phanta Wildlife Reserve since 1986. However, the population has repeatedly been jeopardized by poaching: in 2002 alone, poachers killed 37 individuals in order to saw off and sell their valuable horns.
From time to time wild elephant bulls find their way from Valmiki National Park into the valleys of the park, apparently in search of elephant cows willing to be seduced.
Gaurs spend most of the year in the less accessible Churia Hills in the south of the national park. But when the bush fires ease off in springtime and lush grasses start growing up again, they descend into the grassland and riverine forests to graze and browse. The Chitwan population of the world’s largest wild cattle species has increased from 188 to 296 animals in the years 1997 to 2007.
Apart from numerous wild boars also sambar deer, Red muntjac, hog deer and herds of chital inhabit the park. Four-horned antelopes reside predominantly in the hills. Rhesus monkeys, hanuman langurs, Indian pangolins, Indian porcupines, several species of flying squirrels, black-naped hares and endangered hispid hares are also present.

Birds
Every year dedicated bird watchers and conservationists survey bird species occurring all over the country. In 2006 they recorded 543 species in the Chitwan National Park, much more than in any other protected area in Nepal and about two-thirds of Nepal’s globally threatened species. Additionally, 20 black-chinned yuhina, a pair of Gould’s sunbird, a pair of blossom-headed parakeet and one slaty-breasted rail, an uncommon winter visitor, were sighted in spring 2008.
Especially the park’s alluvial grasslands are important habitats for the critically endangered Bengal florican, the vulnerable lesser adjutant, grey-crowned prinia, swamp francolin and several species of grass warblers. In 2005 more than 200 slender-billed babblers were sighted in 3 different grassland types. The near threatened Oriental darter is a resident breeder around the many lakes, where also egrets, bitterns, storks and kingfisher abound.
The park is one of the few known breeding sites of the globally threatened spotted eagle.
Peafowl and jungle fowl scratch their living on the forest floor.
Apart from the resident birds about 160 migrating and vagrant species arrive in Chitwan in autumn from northern latitudes to spend the winter here, among them the Greater Spotted Eagle, Eastern Imperial Eagle and Pallas’s Fish-eagle. Common sightings include Brahminy ducks and goosanders. Large flocks of bar-headed geese just rest for a few days in February on their way north.
As soon as the winter visitors have left in spring, the summer visitors arrive from southern latitudes. The calls of cuckoos herald the start of spring. The colourful Bengal Pittas and several sunbird species are common breeding visitors during monsoon. Among the many flycatcher species the Paradise flycatcher with his long undulating tail in flight is a spectacular sight.

Tourism
Chitwan National Park is one of Nepal’s most popular tourist destinations. In 1989 more than 31,000 people visited the park, and ten years later already more than 77,000.
There are several lodges inside the national park offering full board and accommodation in combination with elephant and jeep safaris, rafting tours and guided jungle walks. The pioneer safari lodge is Tiger Tops Jungle Lodge which has been receiving guests since 1972, before the national park was established. Tiger Tops has developed standards for responsible conservation tourism and supports the “Long-term Tiger Monitoring Project” of the International Trust for Nature Conservation and anti-poaching units operating in the national park.
Hotels and lodges operating inside Chitwan National Park had to close in July 2012 as the government did not renew licenses and land rental agreements. There are around 350–400 hotels outside the national park, which conduct around 800 elephant rides.
On the edge of the national park Sauraha is a well-known spot for tourists. Accessible from the nearby Bharatpur Airport, Sauraha offers a choice of hotels, lodges, restaurants and agencies that organize day trips into the protected area.