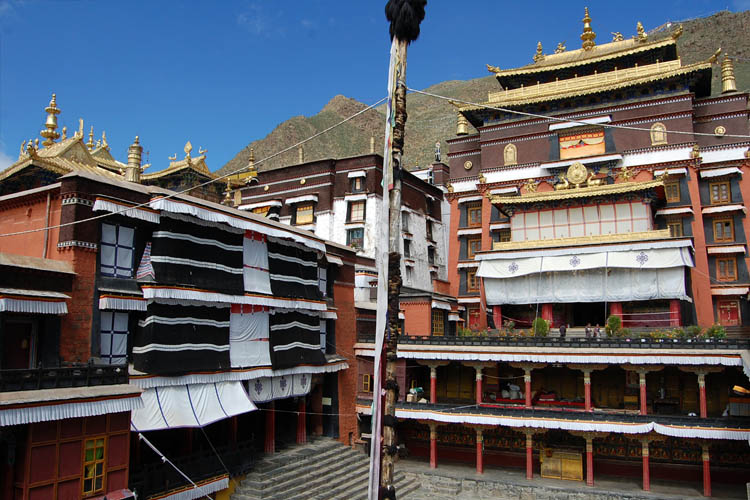 Tashilhunpo Monastery, founded in 1447 by Gendun Drup, the First Dalai Lama, is a historic and culturally important monastery next to Shigatse, the second-largest city in Tibet.
It was sacked when the Gurkhas invaded Tibet and captured Shigatse in 1791 before a combined Tibetan and Chinese army drove them back as far as the outskirts of Kathmandu, when they were forced to agree to keep the peace in future, pay tribute every five years, and return what they had looted from Tashilhunpo.
The monastery is the traditional seat of successive Panchen Lamas, the second highest ranking tulku lineage in the Gelukpa tradition. The “Tashi” or Panchen Lama had temporal power over three small districts, though not over the town of Shigatse itself, which was administered by a dzongpön (prefect) appointed from Lhasa.
Located on a hill in the center of the city, the full name in Tibetan of the monastery means: “all fortune and happiness gathered here” or “heap of glory”.

“If the magnificence of the place was to be increased by any external cause, none could more superbly have adorned its numerous gilded canopies and turrets than the sun rising in full splendour directly opposite. It presented a view wonderfully beautiful and brilliant; the effect was little short of magic, and it made an impression which no time will ever efface from my mind.” Captain Samuel Turner, ‘Embassy to the Court of the Teshu Lama,’
Pilgrims circumambulate the monastery on the Lingkor (sacred path) outside the walls.
Fortunately, although two-thirds of the buildings were destroyed during the Cultural Revolution, they were mainly the residences for the 4,000 monks and the monastery itself was not as extensively damaged as most other monasteries in Tibet, for it was the seat of the Panchen Lama who remained in Chinese-controlled territory.
However, during 1966 Red Guards led a crowd to break statues, burn scriptures and open the stupas containing the relics of the 5th to 9th Panchen Lamas, and throw them in the river. Some remains, though, were saved by locals and the 10th Panchen Lama in 1985 began the construction of a new stupa to house them and honour his predecessors. It was finally consecrated on 22 January 1989, just six days before he died, aged fifty-one, at Tashilhunpo. “It was as if he was saying now he could rest.”

History
The monastery was founded in 1447 CE by Gedun Drub, the nephew and disciple of the famous Buddhist philosopher Je Tsongkhapa and later named the First Dalai Lama. The construction was financed by donations from local nobles.
Later Lobsang Chökyi Gyalsten, the Fourth Panchen Lama and the first Panchen Lama to be recognized as such by the rulers of Mongolia, made major expansions to the monastery. Since then all Panchen Lamas have resided at Tashilhunpo, and have managed to expand it gradually.
In 1791 the monastery was attacked and looted by an army of Nepalese Gurkha warriors but were driven out by the Chinese who at the same time strengthened their control, over the temple and Tibet.
Choekyi Gyalpo, the 11th Panchen Lama according to the government of the People’s Republic of China, has been enthroned there, while Gedhun Choekyi Nyima, the 11th Panchen Lama recognised by the Dalai Lama, has been held under “protective custody” by the Chinese authorities since 1995.
Tashilhunpo in its prime had over 4,000 monks and had four Tantric colleges each with its own Abbot. After the death of a Panchen Lama, these four abbots led the search for his infant incarnation and one of them always acted as a prime minister of Tsang under the control of the Dalai Lama in Lhasa.
In 1960, however, the monastery was disbanded by the Chinese army whilst the Panchen Lama was absent, although less damage was inflicted on the monastery than on most others around Tibet.
During the 1960s many senior lamas and monastics left Tibet and helped re-establish new monasteries in India, Nepal and Bhutan. The late Panchen Lama did not leave Tibet and consequently many of the senior lamas from Tashilhunpo Monastery remained inside Tibet. Therefore, while other monasteries-in-exile have expanded and developed under the guidance of senior lamas, Tashilhunpo has remained at a disadvantage, although in 1972 a new campus of Tashilhunpo Monastery was built by Tibetan exiles at a settlement in Bylakuppe, Karnātakā in southern India.
Since the early 1980s parts of the Tashilhunpo monastery have been open to the public and it is an important tourist attraction in Tibet today.

Halls of the Tashilhunpo Monastery

Jamba Chyenmu ‘The Maitreya Temple’
The Maitreya Temple known as (Jambu Chyenmu)) on the west side is the tallest building of the monastery. It was erected in 1914 by the Ninth Panchen Lama to house a gigantic statue of the Maitreya Buddha and is 26.2 metres (86 feet) in height. The statue sits on a splendid lotus throne in the ‘European’ posture with its hands in the symbolic teaching pose. A single finger of the giant figure is almost 4 feet in length. The statue contains 279 kg (614 lbs) of gold and 150,000 kg (330,000 lb) of copper and brass moulded on a solid wooden frame by Tibetan and Nepalese craftsmen. Small versions of the Maitreya are positioned in all four corners of the chamber and the murals on either side of the door show a more active, antic style than any to be seen in Lhasa.

Gudong: The Panchen Lama’s Palace
On the east side of the monastery is the old living quarters of the Panchen Lama, the Panchen Lama’s Palace known as Gudong. Within, a narrow courtyard gives access to the temple containing the Fourth Panchen Lama’s tomb. The temple vestibule has very large inscriptions at either end praising his holiness. Inside, the silver and gold stupa tomb rivals any in the Potala Palace in Lhasa for the splendour of its craftsmenship and jewels. Measuring 11 metres (36 ft) in height it contains 85 kg (187 lb) of gold and countless semi-precious stones. On the left is three statues representing Amitabha, the Buddha of Infinite Light, whom the Panchen Lams are thought to embody. An upper level has a number of long chapels embroidered in silk thangka’s that relate the lives and events surrounded the Panchen Lamas. Most were made in Hangzou as indeed many throughout Tibet were during the 1920s. The old living quarters of the Panchen Lama are no longer open to the public but the rooms are more modest and human that any of the rooms at the Potala.[citation needed]

Main Chanting Hall
The main chanting hall contains the throne of the Panchen Lama and two connected chapels. The left-one is devoted to an elaborately ensconced Sakyamuni with eight Bodhisattva robed in bocade. The right hand one is dedicated to Tara the goddess who sanctifies the mountain above and whose image is depicted throughout the temple. A White Tara goddess occupies the centre of the altar with a Jade Green Tara on either side.

Sutra Hall
Sutra Hall is the repository chamber of the monastery containing some 10,000 hand-carved wooden blocks used for printing the Buddhist scriptures. These are all Tibetan translations of the original Sanskrit text. Visitors to the temple can buy colured prayer flags and Tibetan lunar calendars as souvenirs which are printed in the chamber.

Gyeni Chanting Hall
The Gyeni Chanting Hall is a chanting chamber of the Tashilhunpo Monastery on the south-east side where Tibetan Buddhism is practised. It has a debating garden in its courtyard with many fine trees. The roof of the chanting hall has a chapel on the north side where two very tall guardians are formed from its structural columns by the use of masks and ancient armour. Outside it are some extraordinary colourful Buddha murals and animal murals which have emerged from folklore and animism. It is situated near the smaller chanting hall of the Ngagang college on the west side.

Ngang College
Ngang College is a smaller chanting chamber of the monastery on the west side of the main path upstairs of the Deyangshar courtyard. A Ngang a morning chanting ceremony with religious musical instruments usually takes place between the few remaining monks of the temple. Pilgrims may circumambulate the hall but tourists, particularly photographers are asked to be extremely sensitive to the religious atmosphere.

Chuajing Duogang: The Great Courtyard
The great flagstoned courtyard of Tashilhunpo, known as (Chuajing Duogang) has walls which are covered by over 1000 repeated Sakyamuni, with their hands gesturing the five symbolic poses (mudras)

The Great Gallery
The gallery of the monastery surrounds the Deyangshar courtyard and leads to the chapels on the east side housing many hundreds of tiny Buddha statues.

The Roof Chapels
The roof of Tashilhunpo has several bronze-gated chapels located on two-tiered levels. On the north side, above the chapels of the chanting hall is the funerary stupa of the First Dalai Lama, the only one not entombed in Lhasa. On the east side is a small ‘chamber of horrors’ chapel. Painted demons, considered now to be defenders of Buddhism betray their origins as the terrifying gods of the old animist Bön faith who only later were absorbed by Buddhism. On the south side is a charming Tara chapel with blue and gold murals on the walls depicting Tibetan history.